A Winter Gift of Eagles

If you’re like me, going for a long walk is among the best things you can do after a decadent Christmas brunch.

We made our way down to one of our favourite beaches, where the skies were cold and dull, and the winter branches stark.

With just scatterings of leaves on this tree, we received an extra Christmas gift – the sight of this pair of eagles perched a good hundred or so feet above the beach parking lot.

I wasn’t sure whether the substantial size differences reflected age or gender differences, and am happy to hear from any experts. I’ve since read that, contrary to my original assumption, it’s the female of this particular species that’s the larger of the two. Apparently, females can weigh 10 to 15 pounds more than their male counterparts, and have wingspans of up to eight feet – whereas the male’s wingspan extends to six feet.

Continuing on our way, we were counting ourselves pretty privileged to have seen the pair – and then received an extra treat. This eagle was perched a bit closer to ground level, amidst the tangled-looking branches of another tree. 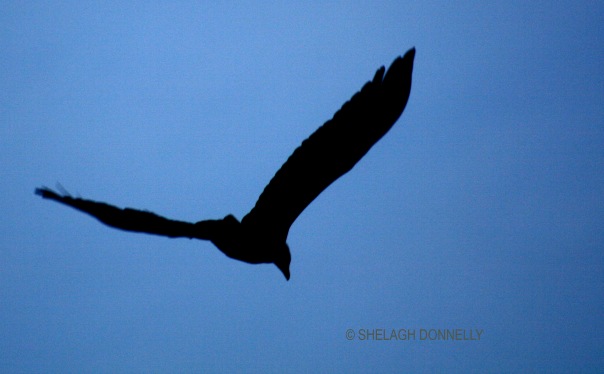 Later, as we looped back and passed the pair again, they both decided to sweep out over the waters – and so I caught this silhouette in passing. It goes to show that the best gifts aren’t necessarily found under trees!

2 Comments on “A Winter Gift of Eagles”