Close your eyes with this image in mind, and inhale the cool, clean air.

Happy new year, all. With thanks to those who stopped by this site in 2014, this image of The Lions is my offering to mark and celebrate the turn of calendar.

There’ll be another post soon with shots of our New Year’s Day tradition – joining others in the silly but fun Polar Bear Swim at English Bay – but, for now, here is the splendour of The Lions. The bridge connecting Stanely Park with the North Shore is named for these mountains, as are BC’s professional football team, a major movie and television show company, and more. Located by Lions Bay and also known as The Two/Twin Sisters, these peaks are part of our legendary North Shore Mountains.

The East Lion stretches skyward 1,606 meters (5,269 feet), while the West Lion climbs slightly higher, to 1,646 meters (5,400 feet). Not that I’ve done it, but hikers wanting to scale the East Lion need to be well prepared, physically and in terms of time (five to eight hours) for a roughly 16 kilometers (almost 10 miles) hike. You needn’t travel up a neighbouring mountain, as I did this week, to see them, though; they’re visible from many areas of Metro Vancouver. 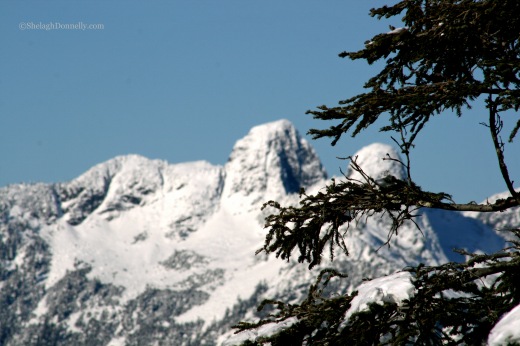